Responding to the fans expectations while developing this new vision of the struggle between the Rebels and the Empire was at the heart of our problem.

With the support of Disney, our conviction was to have a strong global narrative from the beginning in order to develop a consistent guideline between the different stages and mechanics of the experience.

This ubiquitous storytelling in the campaign was inspired by a simple and unique insight to Star Wars:  who has never dreamt of joining the ranks of the Rebellion and fighting the forces of the Empire?

Stage 1: Recruiting with the help of a chatbot

Our narrative, based on a user-centered gameplay mechanism in a social network connected quest is first and foremost a dialogue in the form of an interview.

To join the fight against the Empire, the user must pass a recruitment test with our droid chatbot. This tool, meant to help, was made to be a pillar of our narrative and to amplify the user’s sense of urgency. This constant “pressure” exerted by this rebel droid helps the participant get into character and makes it possible to gradually give specific information about the movie (events, characters, etc.).

Once the rebel has been recruited, the chatbot becomes his privileged ally and thus is at the center of the fight against the Empire.

Once the recruiting stage is over, it is time for the players to fight the Empire.

Every rebel must help his brothers in arms to break free. However, a liberation attempt is always a risky operation and may very well result in the rebel being captured himself.

The movie trailers play an important role in our operation. They illustrate each action taken by the rebel, help to set the Star Wars universe and give an epic dimension to each liberation thus fostering the player’s immersion.

The droid is not left behind in this second phase, drawing all benefits from a tool as powerful as Facebook Messenger. True ally to the players, it assists them in their frantic quest with advice, tips and alerts in the form of notifications – a usage that is now fully part of the public’s habits. 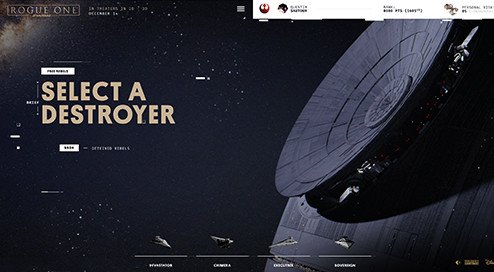 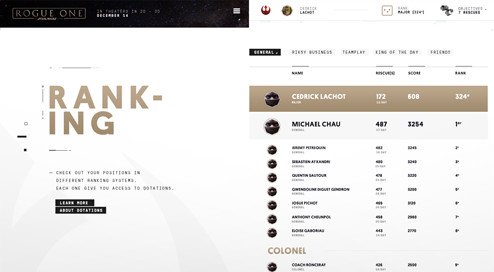 Design - Complying with a famous and established universe

Star Wars has an identity rich and immediately recognizable by the public. From the resources available to us and especially the trailers, we designed an experience faithful to the franchise universe in order to make people want to discover the full adventure.

The advergame being made to be played at any time of the day, besides proposing an optimized multi-platform interface, we wanted the Star Wars DNA to be recognizable no matter the device.

Saving captive rebels with your personal droid then becomes a unique experience that stays true to the Star Wars universe. 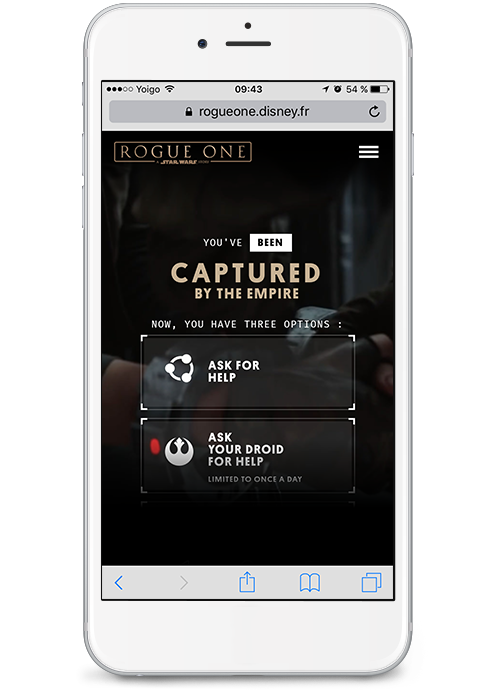 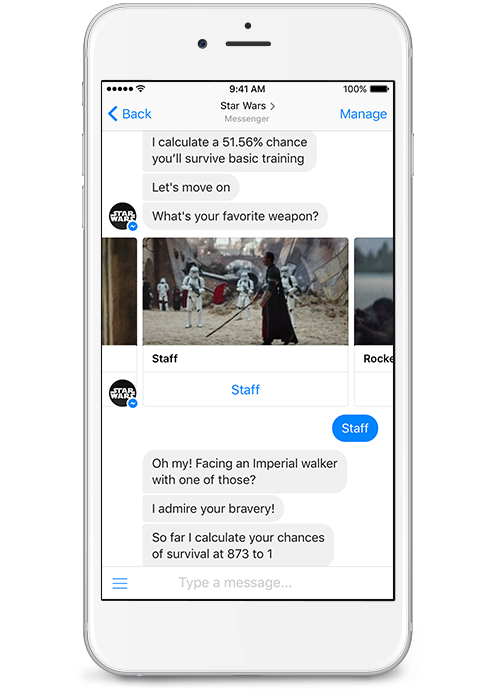 Producing a multi-platform, multi-player and real-time advergame always is a challenge. Creating this experience with the ability to operate between two distinct platforms in order to better serve the storytelling and gameplay, has made this project an even greater challenge requiring all technical skills at FCINQ.

The chatbot being central to the game mechanics, diverting its first use and to developing its functionalities to the maximum have been subject of an intense research and development stage.

Resource management also had all of our attention. The optimization of the different technologies (videos, sounds, 3D WebGL) has been paramount to provide a great fluidity and thus foster the user experience.