From snippets of the script and trailers, we created a social experience where internet users play the role of Max being followed by the Immortan Joe sect, in which a relentless struggle pursues to survive against players that won’t hesitate to attack so they can steal the precious treasure.

For an enriched experience and to demonstrate the film’s rich visual quality, we created an ‘advergame’ whereby the internet user’s actions triggers six contextualised seconds of the trailer. Players are therefore able to watch it tens or even hundreds of times without realising.

We thought up the game experience in little sequences of a few seconds or minutes, but with a high return.
Every ten minutes, the players were able to get new items and play again.

So with 2,300 players, we have had 80,000 battles which averages at 40 games per player. Some have even shunned sleep in order to set up handovers during the three days of racing so they don’t lose their ranking. 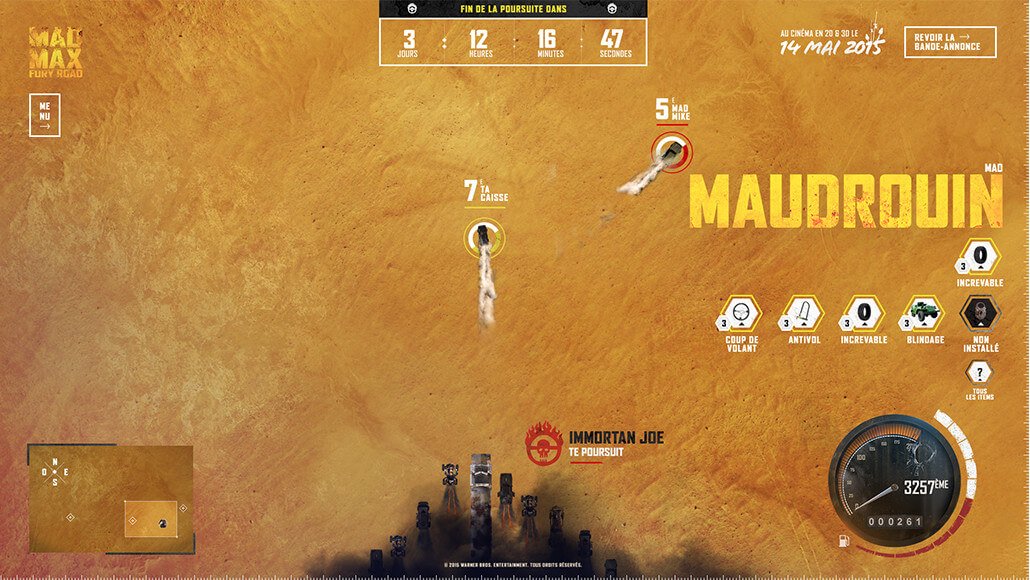 The design echoes the post -apocalyptic, rusty, grungy world from the film, taking the fans straight back to the world they love.
Actions and rules are clear – every man for himself!

Thanks to the use of the film footage and the use of social networking in the gameplay, the participants were seamlessly transported into the experience.

In a nutshell, we came up with an experience that’s intended to be played at any time of day in front of a computer or on a mobile when travelling. 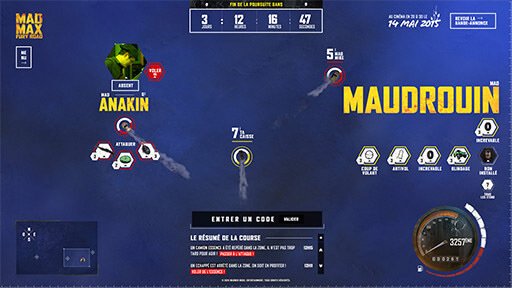 Animating a multiplayer game in real time remains a challenge.

For Mad Max Pursuit, participants had to be kept up to date on different events which with they were involved. We chose Twitter as game master – programmed to comment on every action and event within the advergame.

Once the Twitter nickname was saved, each participant was alerted with updates of the last battle that they were involved in or the arrival of a weapons convoy or fuel on the map.

In this game, resources also had to be managed. Optimising the video was crucial as there was a big map and sounds. In order to speed up downloads and to ensure a seamless experience, we took great care with media encoding.

Every battle generated tweets that were illustrated by Twitter video cards for maximum appeal. Conversations including the #MadMaxPursuit hashtag spread to reach 42 million, not including media plan.

As many as 12 brands like Fnac and sites from the Webedia group followed Warner on this adventure, two brands wanted to get more involved – Allociné and Xbox One.

We pushed the concept even further to make a promo code that created an exclusive item from each brand giving different bonuses to their respective audiences. When the game’s daily storm stopped all further play for an hour a day, only those with precious codes could continue to interact with the race.

The generosity shown by the partnering brands really made the whole process worthwhile for the most committed players.